I am excited to share for my first post for this blog, a tale of my experience traveling for field work internationally while still breastfeeding. In short, it’s complicated, harrowing, and sometimes mortifying. In long:

I have two girls, aged 7.5 and 3.5 (that half is CRITICAL to both of their identities so don’t you dare leave it out). I traveled internationally with our oldest daughter when she was four months for a conference and it wasn’t that bad because she was with me, my husband came along and took care of her when I was conferencing, and I could nurse her when she needed it. That said, I still don’t remember much from that conference due to lack of sleep and those magic hormones we release to make us forget how in the weeds we were in the first year of our children’s lives. (Thank whoever your chosen deity is for that, btw. It’s certainly the only reason I was bold enough to have two.) Anyway, traveling without your baby while breastfeeding is another beast altogether.

Showing her sister how to hold mice 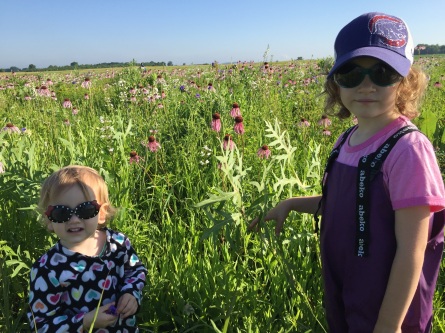 Hanging out in the field (Nachusa Grasslands) with mom

This particular time, I was headed to New Zealand from Illinois and our youngest daughter was 9 months old. I couldn’t bring her because I didn’t have someone to care for her while I was in the field (remote islands are not the safest place for infants – something about the jumping off boats onto rocks and climbing steep cliffs), so I had to trust in Daddy to keep her and her older sister alive while I was gone for two weeks. I was down there to get my new PhD student acquainted with the study system and our collaborators, and to check up on how my MSc student’s research was going.

At 9 months, kids are eating solid food but it’s mostly a bit here and there to get them used to it and the majority of their nutrition is still coming from breastmilk or formula. When you’re a working mom and away from your breastfed child for most days and also travel for work, you have to pump. For those non-moms out there, you basically have to pump as often as your child is drinking bottles while you’re gone. This is to: 1) keep up your supply to the level at which they are eating, 2) make sure you have plenty of milk to give them for the next time you’re gone, and 3) to prevent your breasts from getting engorged with milk as they keep making the milk your baby is supposed to be drinking even if your baby isn’t there to nurse. To paint a clearer picture of what ‘having to pump’ looks like, you have to turn yourself into what feels like a bovine every few hours by using a pump that tries to mimic your child nursing but instead makes a heinous noise and isn’t remotely cute or cuddly like your child. These pumps are…not my favorite contraptions. They have a bunch of tubes, they’re always coated in specks of dried milk, and they really just made me feel like a dairy cow. And when nursing moms travel via airplanes, they have one more thing to carry.

The trip was 23 hours door-to-door. Now, most airports have a nursing or family room so that I didn’t have to pump in the bathroom, but guess what doesn’t? That’s right, the airplane that I was on for 12 hours from LA to Auckland. You know which ones I’m talking about, right? Those airplanes with the teeny tiny itty bitty bathrooms that have the germs of hundreds of people in them and barely enough room for an average-sized human? Yeah, those. And, of course babies nurse more than once every 12 hours at 9 months old, so I had a good 2-3 pumps per airplane ride to contend with in those tiny bathrooms. Not my finest hours. It’s a good thing for those magic hormones.

Once I got to New Zealand, things were great. We had an AirBnB and I had my own room so I could pump at my leisure and most importantly, we had a freezer. That’s right, friends, a freezer is critical for a breastfeeding mom away from her baby for field work because breast milk is LIQUID GOLD!!! I wasn’t about to throw that stuff out and fully intended to bring it all back with me because I wasn’t turning into Bessie the Dairy Cow multiple times per day just to squander the goods.  Frozen milk can last in a freezer for up to 12 months. So, I brought these excellent little milk freezer bags with me (which are handy because they don’t take up much space when they’re empty) and froze the milk. And, luckily for me, in the two weeks I was there, we visited one of our study islands that had a nice bunkhouse that was equipped with a fridge as well. If it had been our tent-camping field sites, I would have brought liquid nitrogen and ice packs to keep the milk cold (or might have considered the dreaded pump and dump).

As it was, I was on a pretty well-equipped island and an AMAZING field site at that – this island (Hauturu-o-Toi) is home to kiwi, tuatara, and the world’s only known breeding colony of New Zealand storm-petrels (NZ stormies), a bird that was thought extinct for over 150 years until it was spotted flying around Hauturu in 20031,2. It just so happened that the team that had first rediscovered the NZ stormies’ only known breeding site (some of my science heroes) were out on the island at the same time as my team and I, and it was like a dream come true! I got to help capture and tag this critically endangered bird and hang out with my seabird heroes. We had a good reconnaissance mission, but it had to be a bit short since I was only there for a couple weeks, and I was sad to leave.

However, unbeknownst to me, I left a little something behind. I was pumping on island, of course, and leaving the milk in little pumping bottles in the fridge and I inadvertently forgot one there! Normally, this wouldn’t have been a big deal but remember those heroes of mine? Well, they were all a bunch of dudes, who apparently didn’t have wives who pumped when their kids were young. Now, it’s important that I take a second here to point out that human milk doesn’t remotely resemble cow, goat, or almond milk. Instead, it’s a cream color and it always has a layer of cream at the top. Despite this, the guys on the island mistook the milk for cow’s milk and PUT IT IN THEIR COFFEE!!! It wasn’t until one of the more recent parents on the team woke up and put two-and-two together that they realized it. He, of course, thought it was hilarious and emailed me to let me know. I, of course, was absolutely mortified!!! I’m still mortified. No word on the science heroes’ feelings as you couldn’t pay me enough money in this world to ever bring it up to them.

The logistics of getting all that milk back were complicated. I had over 20 frozen vessels of milk, ice packs, a few coolers, an extra suitcase to put it all in, and a dream. I was just hoping beyond hope that the milk didn’t thaw during the 23 hour trip because they tell you that after it thaws, you can’t refreeze it and it needs to be used within a few days. I put the frozen milk in a checked suitcase and also had fresh milk that I was pumping in the tiny airplane bathroom.

Frozen milk, tons of ice packs, and no fewer than 4 different coolers for all the liquid gold!

When traveling to the US internationally and connecting domestically, you have to go back through security with your carry on bags. I always traveled with a printed TSA information card that shows one can travel with breastmilk (even though it’s a liquid) just in case because most TSA agents expect people to be with their babies if they have things like milk/formula. When I arrived stateside, I had ~10 bottles of fresh milk with me. And the TSA agent opened and waved some test strip over Each. And. Every. One. And he also tried to tell me because my ice packs were slightly melted, that I couldn’t keep them but I pled my case and finally, he sent me on my way with a cooler of disheveled bottles that now wouldn’t close. After repacking them, I got on my 5 hour flight back to Illinois and happily, got to see these faces. In spite of the baby going on nursing strike for the first 12 hours I was back, those faces, together with the hormones, helped me almost forget how hard and sometimes mortifying it was to be a breastfeeding mom while traveling internationally for field work!

Girls around the time I returned

Do you have special tips for traveling with breastmilk, pumping while traveling (in tiny, enclosed spaces), pumping while doing fieldwork, and the like? Let us know in the comments or join us on Twitter (#femfieldsecrets and @femfieldsecrets) to continue the conversation! Interested in telling your whole tale? We would love to hear from you!